While the Sun Shines


In The Beatles’ iconic ‘Here Comes the Sun,’ sunshine is a welcome respite from a long, cold, lonely winter. In Dubai, luckily, the Sun is a welcome fact year-round and the city’s forward-thinking leaders have intelligently capitalised.

Solar power is among a plethora of renewable energy-driven technologies and projects making Dubai’s grand ambition of meeting 100% of its energy demands from clean sources by 2050 seem a distinct possibility. This rapidly growing trend, which also aids in achieving the Emirate’s 2050 net-zero carbon emissions target, is enthralling businesses, organisations and residences across the city, but is most grandly realised in the gargantuan Mohammed bin Rashid Al Maktoum Solar Park.


With a planned capacity of 5,000MW by 2030 and investments rising to AED 50 billion, the largest single-site solar park in the world will reduce over 6.5 million tonnes of carbon emissions annually. This is projected to have massive environmental, social and economic impacts on the city and acts as a highly-suitable complement to Dubai’s acclaimed 2040 Urban Master Plan.

The park has three functional phases with a fourth, currently on course for completion, garnering investments totaling AED 15.78 billion and aiming to reduce 1.6 million tonnes of carbon emissions every year. At full capacity, the park is expected to provide clean energy for over 880,000 residences.

The sprawling complex also plays host to the Innovation Centre, which supports efforts by the Dubai Electricity and Water Authority (DEWA) to enhance innovation and creativity in clean and renewable energy. A DEWA Museum highlights the entity’s journey to becoming an industry pioneer, while informative spaces explain a range of scientific and technological principles, from radiation to solar cell applications in spacecraft and satellites.

DEWA is implementing an Independent Power Producer model, which has already attracted investments of approximately AED 40 billion through private-public partnerships. This government-led push for sustainability has seen the wider population increasingly accept it as a quotidian practice, with a spate of private residences now adopting solar power as their primary energy source. The avant-garde development taking this thinking to new heights is The Sustainable City. 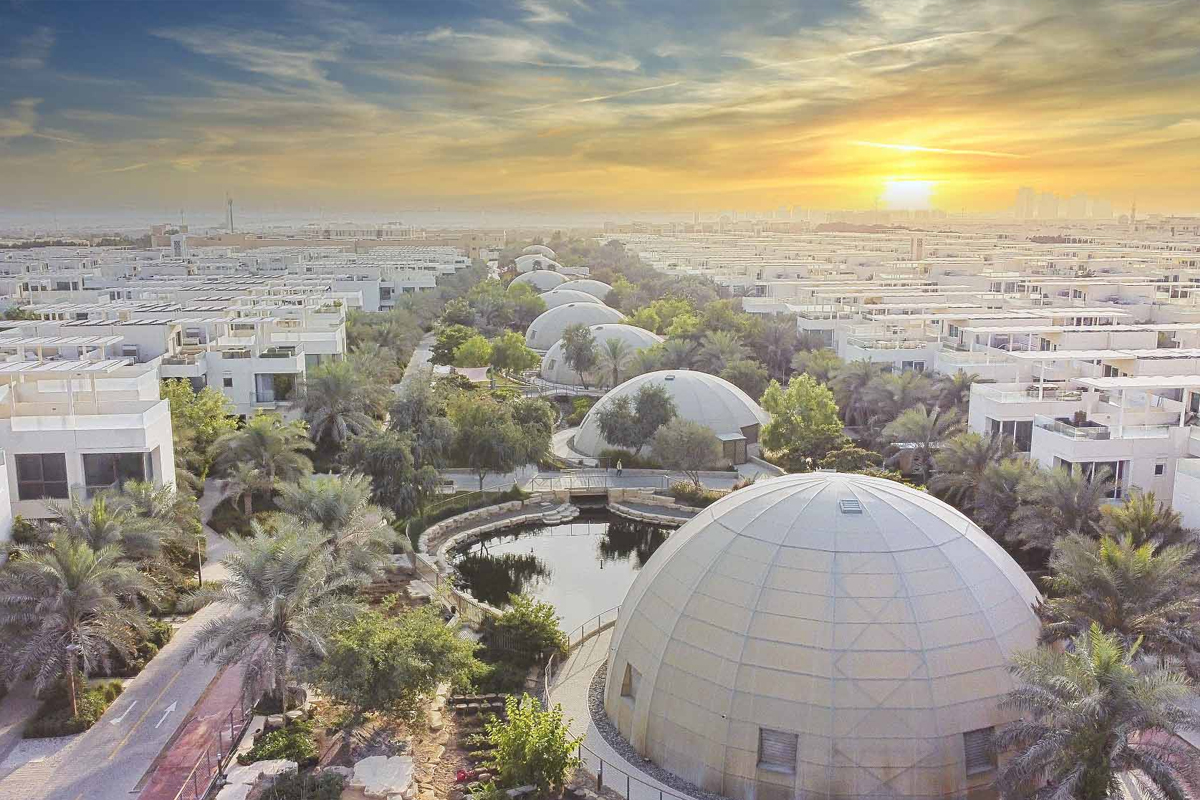 The 113-acre residential development is Dubai’s first operational net-zero energy city and is quickly becoming a landmark showcase for sustainable living. Situated on the Al Qudra Road, 500 spacious villas house 2700 residents, mostly families, who enjoy a comprehensive range of amenities amidst the lush greenery of 10,000 productive and non-productive trees.

Car-free clusters instead encourage the use of bicycles, electric buggies and EV concierge services, while an established school and the dedicated Sanad Autism Village further the community’s welcoming nature.

Two lakes of recycled water add to the verdant surroundings, which account for 60% of the total area, while biodome greenhouses run through the center, providing ample space for sustainable farming. The resultant locally-grown produce furthers the area’s status as a self-sufficient, environmentally-friendly space that greatly enhances a luxury lifestyle.

The houses themselves, replete with a modern, sleek design, are intended to offer a tranquil, luxurious and environmentally-conscious lifestyle. The Sustainable City proves that ambitious government initiatives can encourage seamless public transitions to sustainable living while still maintaining refined and relaxed surroundings.
Quick Enquiry